Rabbit is one of the foods Heather and I first attempted to cook once we started being more mindful of our diet and health.  By cutting out the staples in our diet (pizza, pasta, Chinese, etc.) we found ourselves with a gap.  Luckily for us, we filled that gap with trying new foods.  Rabbit was something that we had never eaten, so when I suggested it to Heather, she was all ears, unlike the rabbit we received.  My favorite thing is that we were able to include the giblets in our chili for the week and used the ribcage along with the carcass from our succulent roast chicken to make stock, so nothing went to waste!

Hasenpfeffer seemed like a logical recipe because we like stews, it allowed us to just buy a rabbit and take advantage of the whole animal, and it satisfied our German heritage.  We decided to make this two weekends ago when Russ of The Domestic Man and his awesome 4-year old Oliver came down to make homemade hard apple cider.  That’s a project in progress, and hopefully we’ll have a full-length post about the process in May sometime, once it’s been bottled, conditioned, and taste tested.  Russ also made a delicious side of spinach to go with the rabbit, and he’ll be sharing that recipe soon!

Chop bacon into small pieces and cook down in skillet 4-6 minutes over medium heat, until crispy.  Also preheat your oven to 325ºF. 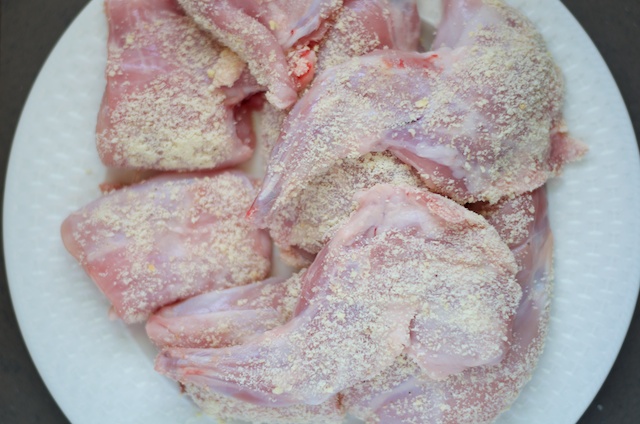 While the bacon is cooking, dredge your rabbit (cut into eighths) in a mixture of almond flour, salt, and pepper.  This was the second time we’ve butchered a rabbit, and last time we wished we had bought a cleaver.  We forgot, and boy did I wish I had one this time.  It can be done, but cutting through bone with a knife is not always easy.

Remove bacon from skillet, and brown rabbit in skillet on each side, approximately 3-4 minutes per side. 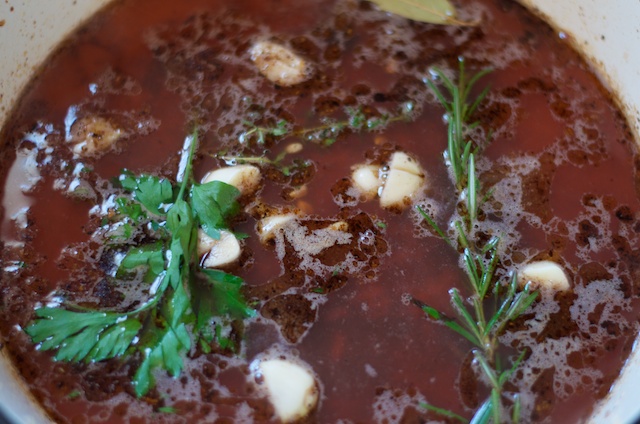 Remove rabbit and set aside.  Pour red wine vinegar, chicken stock, garlic, lemon juice, and herbs into the skillet and bring to a boil.  Scrape all the browned goodness from the bottom of the skillet while the liquids heat up. 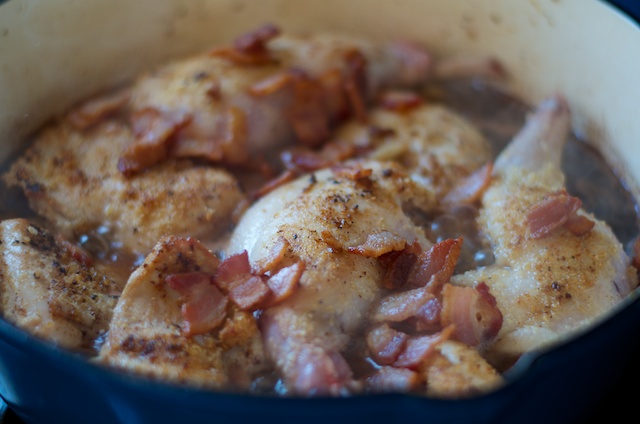 Place rabbit back into skillet and add bacon on top.  Cover skillet, and bake in oven for 45 minutes.

After 45 minutes, add celery to skillet and cook covered for another 25-30 minutes.

Allow to rest about 5 minutes to cool and serve.  If you want, you can reduce the remaining juices (and add a thickener, if you’d like) to make a great gravy for the rabbit or for your favorite faux-tato side. 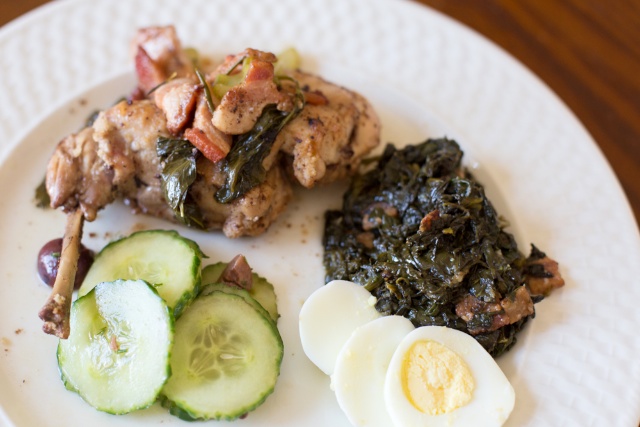 Here is Russ’ plate: complete with spinach, rabbit, and Greek cucumber salad.  When we get together again for cider-related fun, we’ll keep you posted on the latest food shenanigans.

This rabbit is incredibly tender and flavorful.  The vinegar gives a nice sweetness that was unexpected, but delicious. We’ll make this again.  Let us know if you give it a try, and how it comes out!  Also be sure to keep up with us on Facebook and twitter.

And for a bonus, for those of you who noticed we’re making hard cider–here’s a picture of it a week in, fermenting away. 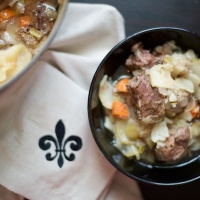 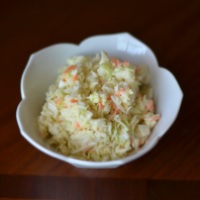